The Detritus Ring is one of the Lore Locations in the Battleborn universe. 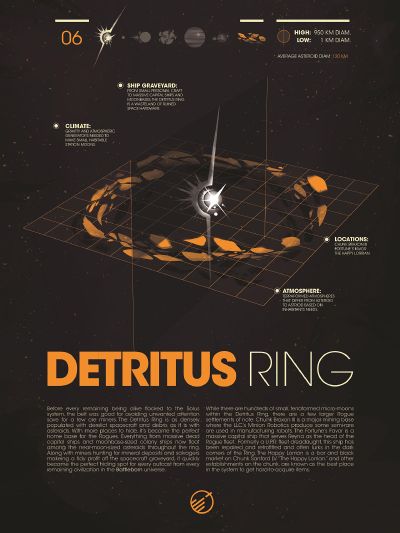 Life inside the Detritus Ring

There’s no better place in the universe – even a shrinking universe – for someone to hide than The Detritus Ring. Before every remaining being alive flocked to the Solus system, the belt was good for avoiding unwanted attention save for a few ore miners. These days, the Detritus Ring is as densely populated with derelict spacecraft and debris as it is with asteroids. With more places to hide, it’s become the perfect home base for the Rogues.

One could say that the Detritus Ring is a wretched hive of renegades, criminals, and survivalists. Just don’t quote us on that.

What happens when the remaining beings in the universe cluster around one star? Besides interstellar overcrowding, everyone’s refuse has to go somewhere – and in this case, the Detritus Ring became a safe dumping ground.

Everything from massive dead capitol ships and moonbase-sized colony ships now float among the near-moon-sized asteroids throughout the ring. Along with miners hunting for mineral deposits and salvagers making a tidy profit off the spacecraft graveyard, it quickly became the perfect hiding spot for outcasts from the universe’s remaining civilizations.