The Jennerit Imperium are one of the five Factions in the planet Solace in Battleborn. Power mad imperialistic force.

The mighty Jennerit Imperium once led the fight against the Varelsi, forging alliances with the other factions to save the stars from the void. But in a desperate turn to spare his people from the darkness, the warlord Lothar Rendain staged a coup to seize control of the Imperium, and aligned its destiny with that of the Varelsi. Though the Jennerit have lost much in their struggle, they remain one of the strongest military forces in Solus. 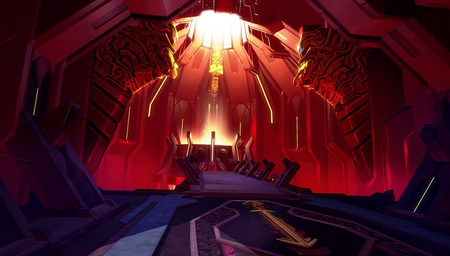 A proud multi-planet humanoid race, obsessed with Domination (and Immortality). A race with a major classist system in place akin to that of the Ancient Greek and Egyptian societies of yesteryear. I would presume that they also have a massive fundamental religious system in their culture; i'm basing that on Ambra's highly influential position as a sun priestess in the Jennerit society.

The Jennerit are known as De facto 'vampires' by the other races, this is probably due the Jennerit's ability to live eternal lives through 'The Art of Sustainment'; performed by the Silent Sisters, the priestesses of the Jennerit Empire. Also the Jennerit really seem to like the colour red, perhaps a cultural thing.

'The Jennerit Art of Sustainment' uses the their sun harvesting planet, Tempest to transfer immortalising energy into the Sustained few. A character only has to go through the act of sustainment once to become immortal, once they have they are eternally sustained, so long as they stay close to home. Sustainment may be the reason many of the Jennerit are so pale, it may also come at somewhat of a 'cost' of some kind.

'The Act of Sustainment' is a privileged activity; one that only the upper classes got to partake in. This probably means the lower classes live shorter lives. The only way currently revealed allow the underclasses to rise to the sustained caste is through becoming a champion of the gladiator pits. There might also be a case for assuming they had slaves (or at least forcibly 'indentured' servants), since the cultures the Jennerit seem to be based on had them as integral parts of their societies.

Ruled by The Immortal Empress Lenore, a Great Imperialist Empire that spanned many galaxies with powerful solar-powered high-tech weaponry used at their Empress's whims. The Empress has an Elite Guard; 'The Keepers of the Blade' pf which Verod Rath was a member of these select few, but left for the front lines since he missed the sweet taste of battle. The Empire seems to have a chauvinistic society with xenophobic points of view. As for the cause of their nigh never-ending desire for conquest, most likely driven to resources probably, or just plain boredom since they do tend to live for a long time. 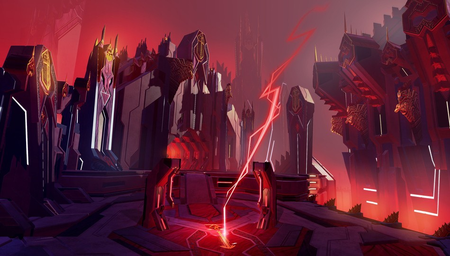 The Warring Section of the Jennerit Empire with the special forces, housed the Crème De La Crème solders of the Empire; The Katana-wielding Sith-Samurai Rath, the Infamous Warlord Rendain and the recently freed Gladiator Caldarius; all of which are sustained. This may be because of the battle advantage being sustained gives them or all the best soldiers exclusively from that elite upper caste. The Jennerit are a warring race, so it's safe bet to assume they had a massive fleet with a plethora of warships for the conquest of whole solar systems at once.

With the Jennerit Empire being such a classist race it seems as though there are a rare few of the upper classes fighting as foot soldiers since they'll most likely take higher ranks like generals; however as such it was probably people in the middle-class, or the lower classes with it being one of the few realistic and viable options to send food home for ones family. Also it should be taken in consideration that in their chauvinistic society being in the military would be seen a respectable/honourable thing even if the cause was meaning-less conquest.

After Rendain's successful coup of the Jennerit Empire to the Varelsi, the surviving members of the Imperium still loyal to reality and common sense decided to continue the fight against the apocalypse with the Battleborn.

It seems as though the New Jennerit Empire will predominately be the main villains of the game.[1]

At their peak - before the Varelsi threatened the remaining star systems in our universe - the Jennerit Empire was the most far-reaching civilization in existence. They are extremely competent (if invasive) scientists, they are ruthlessly efficient at survival, and they have a strong appreciation for warfare and martial combat. While there are a few races that comprise the star-spanning Empire, the core of the empire are members of the race called the "Jennerit". As a race, the Jennerit are known for angular features and four-fingered hands, which set them aside from the more "human" denizens of the universe.

The Jennerit despise any race who express flaws and inefficiencies (which are, in fact, most other races). Even their own society has evolved into caste-based layers with the genetically-altered Sustained at the top, non-Sustained Jennerit just below them, and everything and everyone else below. The Thralls are altered beasts who have been given a modicum of intelligence and are widely employed as a slave race for labor and as grunt warriors. 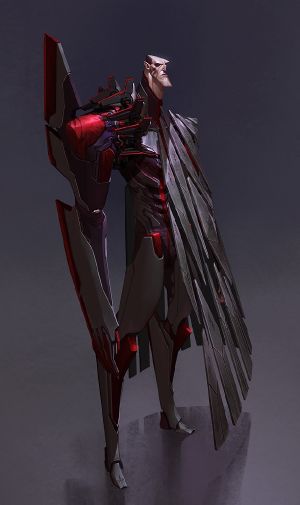 Any Deed. Any Price.

The Jennerit are pragmatists. They are perfectionists. Anything they deem imperfect must be fixed or destroyed. If the Jennerit need to manipulate the laws of the universe in the process, so be it. As the official motto of the Jennerit Empire states: “Any Deed. Any Price.”

To become Sustained, to live forever, is an alluring prospect. Tens of thousands of years ago, Empress Lenore discovered “Sustainment,” a process by which the Jennerit can expend enormous amounts of power to make a single being all-but-immortal. The Sustained do not age and do not grow ill from natural illnesses. There are Sustained Jennerit who are nearly 20,000 years old in the universe. This process is extremely energy-expensive, consuming stored energy on a planetary scale just to alter one being. Therefore, Sustainment isn’t done often, and candidates for sustainment are vetted through a rigorous process, finally approved by the Empress herself. What’s even rarer, and quite unusual, is when a member of a non-Jennerit race is allowed to become Sustained.

Lothar Rendain, the right-hand of Empress Lenore for nearly 20,000 years, earned his spot by leading the Jennerit military. He even served as the central commander for multi-faction alliances against the Varlesi... then something changed.

As more solar systems winked out of existence, Rendain felt something needed to be done. The Varlesi and the coming Darkening seemed inevitable. The only practical solution seemed obvious to him - He had to survive. And that meant betraying his Empress and aiding in the destruction of the remaining universe. After all, when the objective is worth it: "Any Deed. Any Price." Seeing an inevitable alliance with the Varelsi as the most pragmatic option to survival, Rendain led a coup on the throneworld of Jennar, resulting in the Darkening of the planet and everyone on it—including the Empress Lenore. Rendain’s new order – named the Jennerit Imperium – began working with the Varelsi to finish the work of Darkening the universe. Those still loyal to the Empress were dealth with – or fled.

Now, Rendain fights a two-front war – alongside the Varlesi to destroy the remaining universe against the Battleborn and combating a growing resistance that’s rising throughout the Jennerit Imperium.[2]