The United Peacekeeping Republics are one of the five Factions in the planet Solace in Battleborn. As the sworn protectors of Solace, they are keeping peace and protection with a heavy handed draconian law.

A collection of civilizations banded together under the banner of mutual protection, freedom, and equality, the nomadic UPR (United Peacekeeping Republics) – like the other factions – now find themselves in Solus with no home to call their own. Though recently crippled by the secession of one of their strongest constituents, the Last Light Consortium, the UPR remains nonetheless committed to their idealistic sense of justice.

Someone needs to keep the forces of chaos in check. Someone must hold the line against the Varelsi. Someone must defend the last star in the Universe! Those who stand ready join the United Peacekeeping Republics – the Peacekeepers.

The United Peacekeeping Republics is a coalition of space-faring civilizations united under one cause: fighting the Varelsi. Built from surviving intergalactic democratic societies, the Peacekeepers take it upon themselves to protect all sentient beings incapable of defending themselves. Following the rise of the Varelsi and the darkening of stars, the Peacekeepers adopted a nomadic way of life with a growing fleet of ships. Since then, the UPR has focused on bolstering its ranks with civilians and refugees plucked from their homeworlds just before total destruction.

The Split With The LLC

As the fight for survival moved into the Solus system, the UPR first attempted to establish a colony on Ekkunar – the Eldrid homeworld. The Eldrid wanted no part in the UPR, nor did they want them to establish a base on the planet. That sparked a planetwide resistance, driving the Peacekeepers offworld and driving a rift between the Military and Industrial arms of the UPR. As a result of the Eldrid resistance, the merchant class seceded from the UPR and formed The Last Light Consortium (L.L.C.).

The way the LLC saw things: “Where’s the profit in defending every sentient race if we can’t sell our drones to everyone left in the universe?”

Left with few options, the UPR eventually settled on Bliss, the largest moon of the gas giant Nylo. the largest celestial body in orbit around Solus. It’s a violent, frozen, and inhospitable world, but what the heck? At least they get a little sun and the atmosphere is kind of breathable.

The Peacekeepers are well-rounded, well-trained and ready to fight. At their roots, though, Peacekeeper forces are a surprisingly diverse group of characters. What started as a ragtag fleet of survivors has transformed into a battle-hardened military fleet. Most importantly, despite wildly differing backgrounds, Peacekeepers stand united by an overwhelming sense of honor and a mission to answer the call of duty. One of the other perks of Peacekeeper training is that they are ready for virtually every situation. They may not be the strongest or have natural healing capabilities, but they are incredibly well-rounded on the battlefield.

As the military arm of the UPR, the Peacekeepers wield the latest and most powerful conventional arms ever created. Front-line fighters, bullet-belching minigunners, short-range shotgunners, air support – it’s their belief that a combination of guns, grenades and guts will win the day.

Composed of largely democratic societies, the Peacekeepers are an amalgamation of civilizations devoted to the preservation and protection of those sentient beings incapable of defending themselves from conquest or incursion. Many members of the Rogue faction originated in the UPR, including Reyna. Moreover, in the UPR’s heyday, they spawned entire subfactions, such as the L.L.C., which later seceded from the UPR to stand apart as an autonomous governing body, in total control of its economic destiny.

What the Peacekeepers Keep Quiet

However, not all of the UPR's motives are as righteous and altruistic as they’d like to believe. At its best, the UPR is a strong, stalwart defense force providing basic necessities, resettlement and myriad other services to refugees of devastated populations. But there’s a dark side to the UPR, one steeped in bureaucracy, draconian law enforcement, and even forbidden genetic experimentation and clone soldier production – activities that would lead Battleborn such as Whiskey Foxtrot to accuse the UPR of outright fascism. Where the other factions – the Eldrid, the Jennerit, the L.L.C., and the Rogues – can be characterized by their position on how to save Solus, the UPR’s focus is squarely on the preservation of life, no matter the cost – even if the star is lost. In major conflicts, the UPR can most often be found on the front lines, evacuating civilians and salvaging tech for use in their next major showdown. 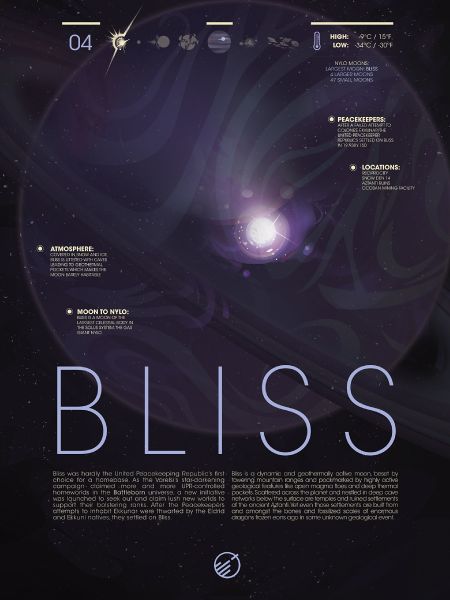 How did the Peacekeepers settle on Bliss?

Bliss was hardly the UPR’s first choice. As the Varelsi’s star-darkening campaign claimed more and more UPR-controlled homeworlds, a new initiative was launched to seek out and claim lush new worlds to support their bolstering ranks. The UPR set their sights squarely on Ekkunar and began resettlement operations, much to the chagrin of the Eldrid and the Ekkuni natives, who waged a two-year campaign to drive the interlopers off of the verdant world.

At this point in the Battleborn timeline, the UPR has been significantly weakened by the secession of the Last Light Consortium, in addition to scores of costly battles throughout the galaxy, and the Ekkuni resistance eventually succeeds in driving the UPR offworld. As viable planets in orbit around a still-burning sun had become an increasingly valuable commodity, the UPR eventually settled on Bliss, the largest moon of the gas giant Nylo – the largest celestial body in orbit around Solus. A violent, inhospitable world, but hey: at least the atmosphere is breathable.